An anecdote on the toxic mix of gullibility and false authority

Somewhat recently I went to visit my mother. I'd seen reports of a lunar eclipse that night. We went outside at the appointed time and watched the moon turn red for a while. While watching the progression of that eclipse, I remembered the time I'd amused myself by becoming a false prophet.

On a night with a total lunar eclipse, maybe 5 years before, I picked up a group of three people in their 20's - two males and a female. I gleefully told my passengers about the imminent eclipse. I don't remember my exact delivery, but I made an effort to be a 'goofy taxi driver' to amuse my passengers. I was kind of like the crazy neighbor Kramer from the 90's TV sitcom Seinfeld.

I might have said, "... and tonight, on your taxi ride, THE MOON IS GOING AWAY."

The guys recognized my faux seriousness. The woman cautiously asked, "What does that mean?"

I might have responded, "Everyone needs a vacation, the moon is no exception. The moon is going to dim for a while. "

"It's not like it's getting moon-napped, it's just taking an involuntary break from its duties, of lighting up our night sky."

"It's completely normal, it's called a blood moon." I tried to explain a lunar eclipse, but she didn't have the references to understand my explanations.

Failing to explain, I sensed an opportunity to amuse myself.

The three of us poked at this poor woman, whose discomfort turned into panic. 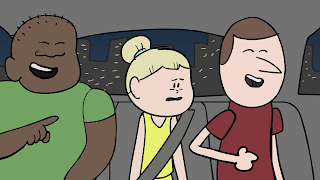 When we got out at their destination the moon developed a distinctly red hue, the same as every time it passes into the Earth's shadow.

I said 'the moon is going away,' and 'we'll probably never see it again'. The tone of my voice was not at all serious, but she couldn't detect that through her escalating panic.

When the eclipse was half over I began to assure my passenger that the moon would be coming back shortly, and that this is a normal event. Within a few minutes the moon had returned to normal, and my passenger's panic quickly dissipated.

I didn't realize it at the time, but retrospectively, I'm amused at myself for becoming my passenger's False Prophet

If I hadn't pointed out that a lunar eclipse was going to take place at that moment in time, those passengers would not have noticed the moon dimmed for a few minutes.

When I told these passengers about the moon going away, the guys recognized my goofiness, but for the woman, having the moon suddenly 'go away' was completely outside of her experience. 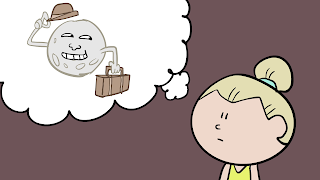 When I dropped the term "blood moon", my passenger couldn't understand how the moon could bleed. If her friends had reassured her that this was no big deal, she would have been fine. But they thought her reaction was amusing too, and we all ganged up on her.

The moon indeed did something strange that night, exactly as I had prophesied to my passengers at the start of their ride.

The vast majority of people go their entire lives without personally witnessing a lunar eclipse. Having told what was coming to pass, then immediately herself witnessing the impossible, I was like a prophet to the woman who was previous ignorant of the "eclipse" phenomenon. 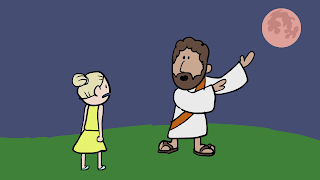 Humans are hard wired for self-preservation. It's better to be cautious and wrong, than cavalier and dead.

I am proud to call myself a false prophet, because I used my powers for amusement, not to enrich myself at others' expense.

Here I would like to point out the difference between "Chicken Littles" and true false prophesy. 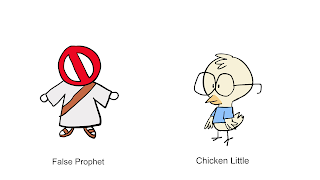 The folk tale of Chicken Little is of a chicken who comes to believe that the world is coming to an end. An acorn falls on Chicken Little, who takes this to mean "the sky is falling!" Chicken Little recruits many other little animals to join his quest to inform the king: THE SKY IS FALLING!

The difference between a false prophet and a chicken little, is that false prophets know better, but pronounce their version of catastrophe to manipulate people. A good false prophet incorporates things that are likely to happen anyways, so that their targets join their movement with minimal resistance.

I don't know that I helped my poor passenger avoid future episodes of unwarranted paranoia and mass hysteria, but I like to think this experience served her, positively, in some way.

Posted by TaxiCabJesus at 9:07 AM