A few months ago I got a txt message from my one-time taxi passenger. It said she'd passed: 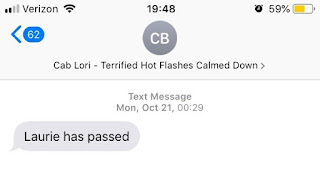 I sometimes saved passengers' phone numbers with little notes to jog my memory, if I thought they might call me directly for a ride. But it's been years since I was active. 'Who was this?'

I tried to search my notes, but I put most of them in a file format that's not easily searched. I recently heard about ripgrep, a command line tool for searching all types of files. I thought back to Laurie again this afternoon, installed ripgrep on my linux machine and used it to find the note:

She'd never taken a taxi before, and had a problem with anxiety. I tried to get all my passengers to laugh, usually adopting a 'goofy taxi driver' persona. Some did not appreciate my antics, but they apparently were calming to Laurie. I'd made her entry bold, probably because she was one of those passengers whom I had the impression was sent to me specifically.

I recently saw this tweeted picture from CALM magazine:

Not all of my passengers needed "small acts of kindness", or big acts of kindness, but I tried to take the opportunities when they presented themselves. These moments were satisfying in a way that a normal job would not have provided.

Laurie must've been in the evening. The usual routine for those shifts was getting the taxi from the owner in the early afternoon, usually 5pm to 6pm. I worked until the bars closed at 2am, tried to nap for a few hours, hopefully caught a few good fares in the morning, then returned the cab to the owner by 6am.

The next few fares were typical of bar traffic. That night I was not in a busy area; the taxi company's bar traffic was also dwindling on account of the rise of 'ride sharing'...

At 4:30am I picked up the former football player who'd lived at a motel for years. He'd played in the NFL and had developed multiple sclerosis (iirc). That might've been the second time I'd gotten him. I didn't like his fare very much on account of it being only worth $5.50, but he was a nice fellow:

The next passenger is one whom I quote all the time:

Attorneys tended not to volunteer they were attorneys, but I was good at getting information from my passengers. After the initial pleasantries the ride was quiet for a while, then the passenger saw a landmark in downtown Phoenix and volunteered a story, which he certainly would not have volunteered if he hadn't already told me he was an attorney...

I tell about what I learned from this passenger all the time.  This will be in the post titled "the predicaments of girls and boys"...