Making connections, one passenger at a time

Drivers who have one of the company's wheelchair vans usually have a list of people who they are to pick up at appointed times. I also have an itinerary, but this I discover one passenger at a time.

The universe has an impeccable sense of timing, and an uncanny ability at arranging for my connections. Sometimes paying passengers appear to take me between my various 'appointments'. Othertimes I get a feeling that I am to go somewhere specific from where my cab is currently sitting. Sometimes non-paying passengers appear to take me in the direction I need to go, or to insert a 'delay' in my schedule, as needed.

Recently I was assigned the fare of a rather old man who was going to Denny's. This he said was his usual Saturday routine, except that day was a Sunday.

His neighborhood was relatively new. I'd gotten to the end of the street and still hadn't found his house number. A jogger coming off the trail said there was an elderly fellow just out of view. I drove over the sidewalk and down the trail. The passenger's property was secluded and seemed very old, and did not-at-all blend with his neighbors' houses. The satellite imagery shows an antique homestead surrounded by a modern development:

Something was said about "selling black people in Arizona", but he sure-as-hell was not that old, and his parents couldn't have been that old either. He'd lived on that little patch since birth, which was probably in the 1930's. The main house burned down in 1970-something, which he vividly remembers like it was yesterday. 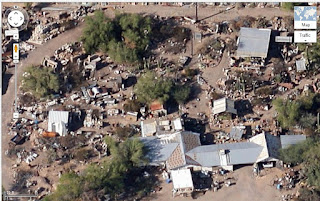 The hostess recognized him, and said it'd been a while. He probably hadn't been there recently because it was such an effort to walk, and the long handicap ramp was quite a trek. But it must be easy to put ideas in people's minds, "I should go to Denny's right now."

The very next fare was my appointment, and at that particular time the Denny's parking lot was exactly where I needed to be to catch it.

Police cars at the pickup address tend to suggest something unusual. The passenger was getting kicked out by her parents, and was quite stressed. The officers had been there for a while, I guess. One of them said "good luck with this one."

As we pulled away, she broke down. Husband left her & autistic daughter 7 months ago, has been homeless since, daughter has been living with her parents, wants nothing more than to be mother to her child again. I was able to calm her down, and helped her find a light at the end of her tunnel. She is doing much better now, and last I heard she had made progress at getting into a shelter.

This was not the most profitable use of my taxi, but there are things more important than instantaneous compensation.

On Saturday I said I'd take one of my taxi-friends to her nephew's birthday party at Peter Piper Pizza. Her girlfriend called before the appointed pickup time to ask if they could go early. I knew she was coming home from work on the bus, so I offered to pick her up at the bus transfer point and take her home. When we were almost to the apartment I was offered a fare for the area I was in. "How much time do you need to get ready" I accepted the fare - it was someone at Fry's. "probably will be real quick, just someone going home with their groceries, I'll be right back."

But "Eric" had no groceries, and asked to go 12 miles down the interstate. If I was a normal taxi driver I would have listened to the intuition that he wasn't going to pay and ask for money upfront, but I always have to consider the bigger picture.

The passenger didn't know exactly where he wanted to go. He was quiet, and rather hard to understand... After driving around in the area he thought his destination was at, he gave the name of the restaurant at "12th St & Van Buren," which was way-the-hell on the other side of Central. If he'd given the restaurant's address in advance I'd've gone straight there, and saved myself 10 minutes of surface streets. We got to the destination house, he looked at the meter and was like, "okay $40, be right back," and disappeared through the gate on the side of the garage. I got the sense right away that I wouldn't see him again. The friend's girlfriend called just as the theif was getting out to see where I was, which marked the time. 4 minutes passed, "keep waiting." 7 minutes passed. Should I just go? "No, keep waiting." 10 minutes passed, "okay you can leave now." Grr.

I got back on the freeway, and raced back to my friends' apartment complex. They were relatively-prompt at getting in (usually these two take their sweet time), and we made good time to Peter Piper Pizza. I booked in ("Hi Skynet - I am ready for another passenger"), and was promptly offered a fare for the Walmart ~300yds away.

After dropping this passenger I got a mother/daughter at the senior apartments going to Fry's Food down the street. Then I picked up my roommate at the bus stop at the same intersection, as she was going to Target, and since I was in the area and it was a short trip it was an easy pickup.

(Aside: Matching fares to drivers)

Fares are first offered to cabs in the fare's zone (2-mile by 2-mile squares), then to cabs in adjoining zones, then are posted/announced for general availability (that any driver can ask for).

Scottsdale is usually flooded with the company's taxis - because there are plenty of fares, the potential for big fares, and very few people who can't actually afford their fare. For most the day the fares in most of Scottsdale are NOT announced because they are assigned to a nearby driver first. But around 4pm Drivers who lease their cabs for 12-hours are at the end of their shifts, so the number of drivers everywhere goes down for a bit, before the night drivers get to their favorite areas. Most days at 4pm the fares start to build up on the "available to anyone" screen. (12-hour cabs are checked out between 4:00 and 7:00, AM and PM, and due back no more than 12 hours later.)

While my roommate was at the bank ATM I looked at the available fares screen, and realized that if I booked in right then I would be offered a fare in the nice area just to the north. It was a time-call for 3:50pm to the large apartment complex. My roommate came back from the ATM and I took her over to Target, before proceeding to get my next passenger.

I called the passenger, and she said she'd be right out. She had a gift bag. "YOU'RE GOING TO A BIRTHDAY PARTY!" Bachelorette party, actually. "EVEN BETTER!" Enthusiasm helps the shifts go more smoothly.

How long have you known the bachelorette? 4 years. How do you know her? Work with her. Where? Local television news. Oh, interesting... Are you one of the on-air people? She's a reporter. Do they give you stories to report on? No, she has to come up with her own ideas and get approval. Lately she's been reporting on the stupid-college-student stuff, where ASU students are beating eachother half-to-death, and is thinking about doing something about a certain 'Medical Marijuana' farm...

After dropping the reporter off at the resort in Paradise Valley, when I booked in again I was offered a fare for the area near Camelback & Scottsdale Rd.

I called the number, and learned that I was to pick up the Salon/Spa's customer at the given address. When I pulled up, the passenger came out and asked if I knew where the Hilton Garden Inn was. After thinking for a bit I asked, "which one?" There are two Hilton Gardens - I was once sent to the one to the north, while the passenger was actually at the one to the south. She was at the location on Indian School Rd.

"So where are you visiting from?" Not visiting, she actually has a house in the area but she travels so much she doesn't have much of a chance to stay there. Then she says that dealing with jetlag is quite a problem for her.

Walking barefoot on wet grass and the proper use of stainless steel can help with jetlag, so I told her this. She'd never heard of it before. "That's because you don't have [book]."

At the Hilton Garden Inn we chatted for a bit - she's been through the medical wringer, like many people. I booked in again and was offered another fare, which I accepted. Perhaps the book I suggested will have some clues for her.

On a Monday morning, maybe 2 weeks back, I thought it would be good to wait in the Trader Joe's parking lot in Surprise for my next fare. People start heading for doctor appointments and the like around 5am. At 4:45 I accepted a fare (400yds?), and learned that I was going to the Mayo Clinic Hospital. This was a pretty good voucher (more than $30), and made up for my not-so-profitable night.

The woman was having a procedure done at the procedures building, and her husband was going with her. They'd moved to the desert from ... New York, or the Midwest, because their son is a mechanic at Luke Air Force Base. He'd much rather be in Alaska. "ARE YOU A GOLD MINER?" She laughed. No, just likes the cold, almost but never quite made it to Alaska in his semi-truck.

Dropped them off, and booked back in. I was promptly offered a fare in the same 2x2mile square as the Mayo Hospital. "Hi this is [TCJ], coming to get you, currently at the Mayo Hospital." He told me that I was going right back. Oh, ER visit. Hmm.

He flagged me down in the apartment parking lot, then she came out by herself to get in. Something was said about her going to the hospital regularly since she was 5 years old. If she had more money that morning she would have gone to Scottsdale Healthcare on Shea because that's where she went last time, but all she had was enough to get to the Mayo Hospital. She did have insurance to pay the hospital on her behalf. She was probably insurance-rich but cash-poor - at least she had a nice place to stay the night. Hmm.

I commented that doctors like to run lots of tests and tell you what's wrong with you, but not so helpful at resolving chronic conditions. She agreed, but what choice did she have? The medical guild has an almost-monopoly on what most people think are reasonable things to do if one feel unwell.

This passenger could have called for her taxi any time that morning. With anyone else she might've gotten a rather crabby driver. Hopefully I put her in a better mood for her emergency room ordeal.
Posted by TaxiCabJesus at 4:01 PM