origin of the 'tcj' moniker

When I started my taxi driving odyssey about a year ago, I had no idea what I was getting into.

One of my early passengers was a very-pregnant hispanic woman who was going to the hospital to have labor induced. Her blood pressure was through the roof and getting higher, and the doctor was like "we've got to get this baby out of you before it kills you!"

I asked what she'd been eating for the last few months: "saltine crackers". Really? Didn't your doctor tell you that you need more than saltine crackers for a health pregnancy?

But because of the nausea the crackers were all she could keep down. Doctors are good at making work for themselves.

The point of 'TaxiCabJesus' was just to tell stories about doing little things that make a big difference for the people they're for.

I used to carry gelatin packets with me for when I needed a protein boost. That first pregnant woman promised me that she'd use them, so I gave her the box. I was good about carrying gelatin for poor pregnant women for a while (many of them have high blood pressure, which is to be expected when you're a malnourished pregnant woman getting unhelpful advice from the medical establishment).

MDC said he'd be at the bus stop at 8am, but I'd arrived late the night before and had a hard time getting up. I made it to the area he said he usually was at by 9:30 or 10am, and found MDC walking down the street. His beard was approximately as I remembered it. 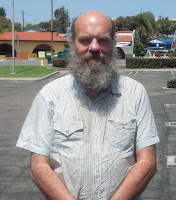 After breakfast he asked if I could spot him a few dollars for a crossover cable, so he could get his laptops talking to each other. I thought I had one in the car (as I had just cleared out my mini-storage in Oregon). That box had 3 orange cables, and I gave him one that said 'crossover'.

I needed a haircut for my appointment in Los Angeles, and he'd previously mentioned getting rid of his beard, so we later went to a barber shop. Mr. Crawford said he felt like a million bucks afterwards:

I realized last night that I have another phone app that will need to be done, and it's always good to have people on your team.

MDC had some good insights about our make-work economy. I didn't realize that prison guarding is the highest-paid unskilled profession in California. I have a copy of this month's rolling stones magazine, which has an article about California's 3-strikes law, but haven't read it yet...
Posted by TaxiCabJesus at 12:36 PM